How Accurate is a Fitbit Calorie Burn?

Digital Life Central is reader-powered. We are a participant in the Amazon LLC Associates Program and other affiliates programs. As an Amazon affiliate, we earn from qualifying purchases.

Calorie counters are one of the most attractive features of a fitness tracker. They provide data that can be used for both analysis and motivation, making it easier to adjust your program and goals to hone in on getting the possible results.

But these counters do come with one serious question: how accurate are they? Some calorie counter trackers have a seriously wide range when it comes to the possible error percentage, so it’s important to know about the level of accuracy you’re dealing with when you start.

So let’s look at Fitbit as a typical example of how these things work. Specifically, how accurate is Fitbit calorie burn? Of course, it’s one of the most popular fitness bands around, so it’s natural that the accuracy of its calorie counter gets quite a bit of scrutiny. But, unfortunately, that means more information, more misinformation, and more misrepresentation of facts, which means some is sorting out to do.

A quick search focusing on the accuracy of Fitbit’s calorie counter is slightly frightening. You’ll see links to studies saying that Fitbit is accurate to within 4 percent. Then you’ll see threads from different forums saying that the error percentage can be as high as 27 percent, if not more. Is someone doing some very creative lying here?

Yes and no. As demoralizing as these numbers are, they really shouldn’t be all that surprising. Basic calorie counting methods and technology in wearables have been fairly basic for a long time, so while we are way past the pedometer when it comes to accuracy, we haven’t quite reached pinpoint accuracy just yet.

One of the fundamental problems with wearable tech for this particular measurement is that fit bands like Fitbit are trying to replicate the measurement capabilities of exercise lab equipment that can nail the count right down to the last calorie.

That means some degree of inaccuracy is inevitable, which makes that question all about knowledge. Specifically, what kind of tracking is Fitbit using, and where exactly does it fall short?

The basics of fitness tracking technology are based on something called BMR, which stands for basal metabolic rate. That’s the rate at which your body is burning calories, usually when you’re doing nothing at all. This accounts for approximately 70 percent of all burned calories, with calories burned during physical exercise added on to that.

The way your fitness tracker works begins when you fill in your BMR numbers. These include your individual demographics-age, height, weight, gender, and so on. This obviously opens the door for the first level of inaccuracy, i.e., what happens if you lie or fudge the numbers? Unfortunately, the BMR isn’t a lie detector, so there are all kinds of opportunities for errors that sometimes get blamed on the fitness device.

What the Fitbit band does from here is to do things like count steps things based on the kind of exercise you’re doing. Of course, walking and running are the two biggest ones, but with Fitbit, there are also categories for things like floor, sleep, and heart rate.

Once again, these are estimates based on numbers that are filled in. They’re run through a proprietary algorithm, and that’s how Fitbit gives you the number of calories you’ve burned.

The algorithms represent the secret sauce for the fitness tracker companies so that they can be individualized in any number of ways. This includes the possibility of being manipulated to show aggressively positive results, which may be the reason for apps that show what feels like ridiculously high numbers when it comes to the number of calories burned.

There’s a fine line between a positive results skew and out-and-out fabrication, of course, but integrity isn’t a boomerang, so fitness companies have to be careful with this kind of thing.

Another source of inaccuracy is individual variations. For instance, if you have a fast metabolism, the extra calories you burn as a result are based on the numbers you plug into the app, so you may not necessarily be getting a solid read there.

The other accuracy issue is the types of exercises that can be recorded. Calorie counters are at their best when they’re tracking motion, i.e., walking and running. They’re less reliable with strength and resistance exercises, although the algorithms are getting better at handling these aspects of your workout program.

And while some fitness bands have live heart monitors, heart rate can vary according to the setting, whether or not you’re stressed, and so on, so there’s plenty of room for error there, too.

There is new technology on the way to make fitness trackers more accurate when it comes to calculating calories, though. One is the addition of extra sensors that track more accurately.

The best example of this is the technology used by GoBe2, which is made by a company called HEALBE, to take things to the next level and determine a number of additional health parameters. 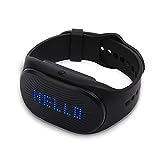 Healbe Gobe 2
Check on Amazon We are a participant in the Amazon LLC Associates Program. When you buy through our links, we may earn a small commission.

One sensor is called a piezo sensor, which the company claims will provide a more accurate number than any other wearable available. Another is a 9-axis accelerometer that includes a gyroscope and a magnetometer, and these sensors combine to measure what HEALBE calls the DEE, which is your daily energy expenditure.

Another acronym called PAI, which stands for physical activity index, tells the device how active you are compared to your resting numbers. These sensors will increase the accuracy of the information your fitness band gives you, so it’s worth tracking this kind of technology as it continues to evolve.

So what’s the solution to the accuracy problem? Well, don’t lie when you input your numbers, for one thing. Instead, try to be as accurate as possible, which will minimize the error percentage when it comes to your calorie burn.

Another is to use the readily available fitness charts for everyday activities for running, walking, and most strength and resistance activities. They won’t fit you to a T, of course, but you can use the number in these charts as a basis for comparison to what your Fitbit is telling you, and if you’re in the ballpark, you’re probably good to go. If not, and if a number looks too good to be true, follow the old adage-i.e., it probably is.

Which Fitbit do I have? Find The Answer Easily

What are Active Zone Minutes on Fitbit?

Digital Life Central open the doors of the digital wearable world. We aim at helping you make the most of your smartwatches to better train, better live and achieve a better health.

We use cookies on our website to give you the most relevant experience. By clicking “Accept”, you consent to the use of ALL the cookies.
Do not sell my personal information.
Cookie SettingsAccept
Manage consent

This website uses cookies to improve your experience while you navigate through the website. Out of these, the cookies that are categorized as necessary are stored on your browser as they are essential for the working of basic functionalities of the website. We also use third-party cookies that help us analyze and understand how you use this website. These cookies will be stored in your browser only with your consent. You also have the option to opt-out of these cookies. But opting out of some of these cookies may affect your browsing experience.
Necessary Always Enabled
Necessary cookies are absolutely essential for the website to function properly. These cookies ensure basic functionalities and security features of the website, anonymously.
Functional
Functional cookies help to perform certain functionalities like sharing the content of the website on social media platforms, collect feedbacks, and other third-party features.
Performance
Performance cookies are used to understand and analyze the key performance indexes of the website which helps in delivering a better user experience for the visitors.
Analytics
Analytical cookies are used to understand how visitors interact with the website. These cookies help provide information on metrics the number of visitors, bounce rate, traffic source, etc.
Advertisement
Advertisement cookies are used to provide visitors with relevant ads and marketing campaigns. These cookies track visitors across websites and collect information to provide customized ads.
Others
Other uncategorized cookies are those that are being analyzed and have not been classified into a category as yet.
SAVE & ACCEPT